Juggling projects with the Adirondack Film Society, NY Loves Film, Adirondack North Country Association and others keeps us busy. This site is a nice home base which we’ll update from time to time with special project updates. For the more regular goings-on, co-founder Dave Press runs the Tumblr site. Be sure to tune in over there and follow us for breaking news … like the forthcoming Production Directory for regional film, television, and event professionals to list their contact info for productions coming to our neck of the woods.

Mogul Productions – one half of the ADK MOGUL media company located in the Adirondacks of Upstate, NY – has been busy since launching the Go Digital or Go Dark trailer this spring.  A new short film to follow-up The Deal has been going through the script-writing phase, and in the meanwhile, the bills are being paid by providing services.  On a recent project in October, MOGUL provided location scouting and photographic services for MacGuffin Films.  Based in NYC, Macguffin has created several spots for New York State Tourism.  Click through the image below to view the “apple picking” video for which we found an orchard in Westport, NY (it’s the fourth short video in the series).

Here is the full trailer for the Go Digital or Go Dark campaign. After viewing, click here to help save your local theatre. 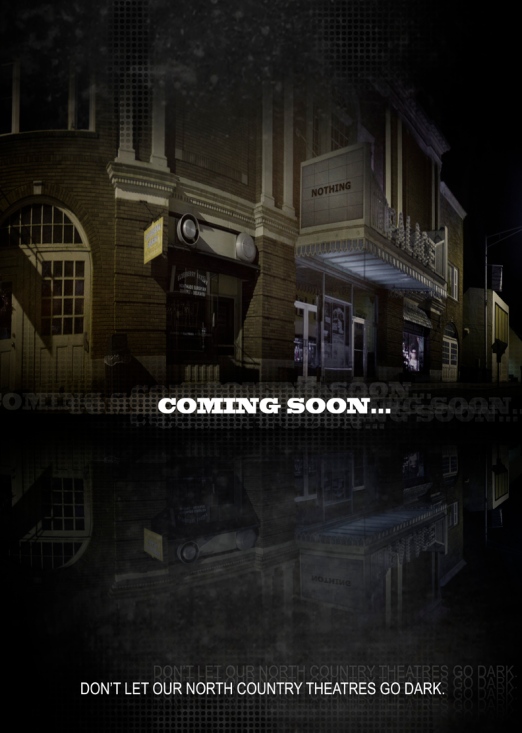 Einstein said that if you want to understand something better, try and explain it to your grandmother.  The more I find myself talking about the digital conversion issue which faces independently owned theatres, the more feel like I understand it.  But, it’s challenging.  The topic is complex, and not black and white.  And the rabbit hole, it seems, gets deeper and deeper.

In 2012, the Lake Placid Film Forum hosted a Panel Discussion called “Do Movie Theatres Have a Future?”  The answer, I have come to believe in the months since, is a resounding Yes.  And the road to success is one that literally takes a village.

Not everyone agrees, however.  Some extremists feel that public film exhibition is dying out, like print media or landline telephones.  Many people I’ve talked to disagree that the issue ought to involve fundraising or community support – that theatres are a business which should take care of themselves.

This is where the complexity starts, in my experience.  A movie theatre is a unique business.  Most people would agree that going to the movies is not the same as buying something from a store.  It’s more akin to an event, like a trip to a museum or a theme park.  Often it is accompanied by one or more micro-events, such as going to dinner, doing a little shopping in the neighborhood district, or grabbing a coffee.  Going to the movies often includes other businesses besides the theatre.

Another opinion I’ve heard advanced is that the theatres ought to have “seen this coming.”  Meaning, as a responsible business, a theatre owner should have foreseen the conversion to digital and prepared to navigate that switch by budgeting for the new equipment.  The theatres may not have seen this coming because there has never been any firm end date described; it’s been a vague threat on the horizon for a short while.  And unless they had a few hundred thousand dollars lying around or were able to raise that money in that small amount of time, they’re in the lurch.  Perhaps the theatres could have raised ticket prices or charged more for concessions?

Right now the average digital projector costs about $90,000.  (That’s a lot of five-dollar popcorn.)  This level of projection is required by the studios and distributors who hold the rights to the kinds of films small town theatres need to book in order to access a decent audience – especially in tourist-economy communities where out-of-towners expect the same fare they could see at home.  Some theatres have two or more screens.  They may also be required to retrofit for sound.  They may need to make major renovations to remove the old platter system and install the new projector.  And there are all sorts of add-ons and requirements the distributors attach to the projection process.  But that’s only where the dominance of the distributor begins.

What I learned from getting more involved in this issue is that a movie theatre doesn’t work in remotely the same way as other businesses in terms of peddling its wares.  A distributor of a Hollywood film typically gets 70% of the box office on an opening week, leaving the theatre owner with 30% of the money folks trade for tickets.  Sometimes it’s the first two weeks.  It’s only after two or more weeks that the inequitable percentage may drop a little.  But by the time the contract allows the theatre to claim a majority of the grosses, the film may have been playing for four weeks or more, and by then, most everyone has seen it.

On the other hand, the money that the big studios are saving with the conversion – no longer having to process or ship prints – is astronomical.  Even conservative estimates show a saving of billions of dollars just in the first years.  Yet none of these savings have been paid forward to the independently owned theatres.  There have been plans for a kind of high-conditionality loan, but it’s something that resembles indentured servitude more than a helpful leg up.

This is because it was the original intent of Hollywood studios to control everything from the acquisition to the exhibition of filmmaking.  Film historians and long-time theatre owners tell us that film studios never intended for the “middle man” of privately owned movie theatres to exist in the first place.  When they first began to spring up in the early 1900s, the studios conceded to work with the small theatres only because they thought they would serve to extend market reach to rural towns…and small towns.  In time, the studios figured that they would spread their own theatres to these regions anyway.  And that time has come.  Industry insiders say that the big studios have known that this conversion would wipe out the majority of independent theatres, and that this was not only something they wouldn’t try to stop, but an added bonus.

The good news is, a digital conversion can serve a theatre which chooses to continue its relationship with its booker and distributor, or it can serve as a tool to liberate the theatres as well.  For the audacious theatre owner, digital projection can allow for great latitude in programming, from live sports and artistic events, regional independent films, foreign films, cult favorites, classics, and throwbacks – auditoriums can also be rented for interactive conferences, festivals, parties, and more.  The sky is the limit.

But the absence of small theatres in towns like Lake Placid, NY will likely yield the kind of Hoyts and Regal-Hyatt multiplexes in league with big-box stores like Wal-Mart and Target.  Big-box business tend to set up camp on the edge of a town in anticipation of sprawl, and dredge the downtown district of that community, often leaving it derelict and devoid of character, devastating vital retail business, restaurants, or most anything else.  And these multiplexes are likely to show only the “name” films which offer less and less variety as studios make fewer films per year, packing more money into one extravaganza franken-movie which runs for three hours and plays for eight weeks.

The digital conversion issue, I have come to learn, is a Davy and Goliath story.  It is one more manifestation of the tendency towards homogenization of culture, the push towards corporate, global business, and the decay of character-driven, independently owned small business which enrich our communities.  By working to help the regional theatres stay open, we help to preserve small business in the community, sustain a unique part of our culture, and ensure economic welfare for other businesses that benefit from having a destination for nightlife.  I think grandma would understand that.

It’s true.  The turtles have been sighted in the Adirondack Mountains, doing some cowabunga-ish stunts over at Big Tupper.

Here’s the scoop:  Tupper is not the site for all of TMNT’s principal photography, but for some key action scenes that will be part of the climax of the film.

We know because we helped to scout the Adirondacks last December when a Location Manager of the “Snow Unit” was poking around.  After working on the scout, we agreed to keep things quiet.

What we can say now is that the producers of the film were drawn to the region because they had spent time in Vancouver for the Winter Olympics.  When the big snowy action sequence was dreamed up, they thought that a region with facilities equipped to accommodate big action like the Olympics would be able to handle the big stunts for a Blockbuster film.  So they started investigating Lake Placid, and other North Country venues, including places in Vermont.

We ran around and snapped pictures of various places in Lake Placid and along the outskirts.  We checked out Mt Pisgah in Saranac Lake, and then we also recommended looking into Big Tupper.

The rest is history.  …Or, will be, shortly.

The TMNT film is a reboot, as envisioned by Michael Bay, he of the “Transformers” legacy (some would say debacle).  Whether or not the film is up to the fan’s standards is probably a non-issue, as the Transformers films still raked in the dough, as did the oft-derided prequel Star Wars films.  It could be said that what sells tickets is the chance for people to jury a film.  Especially in today’s ultra-connected world when social networking word of mouth rivals the summations of professional movie critics.  We’re not guaranteed that a film will live up to our expectations, but we’re given the chance to make that call, and then shout our feelings from the rooftop.

However TMNT turns out, ADK MOGUL is glad to have been a small part (we like to think we helped get the ball rolling) and we’re grateful to see our vision coming true – a resurgence of filmmaking, both big and small, in the Adirondacks, bringing money and jobs… and the chance to see mutant turtles sliding down a ski slope on their shells.  What more could one ask for.

Kirk Sullivan, a native of Saranac Lake, NY, “comes up” from assisting megawatt producer Joel Silver and proves he’s got what it takes to get behind the helm himself with his meta, movie-about-a-guy-who-works-on-movies-while-trying-to-get-his-own-movie-made.  It’s mind-melding yet refreshingly simple, brandishing real film stock (not ones and zeroes) with the kind of floating camerawork and poppy, actioner soundtrack that reminisces movies from…well, Joel Silver.

Check out “The Come Up,” the short flick that landed Kirk his chance to debut as a feature film director.

The Come Up from kirk sullivan on Vimeo.

How Kirk raised money for The Come Up

Error: Twitter did not respond. Please wait a few minutes and refresh this page.

ADK MOGUL
Create a free website or blog at WordPress.com.